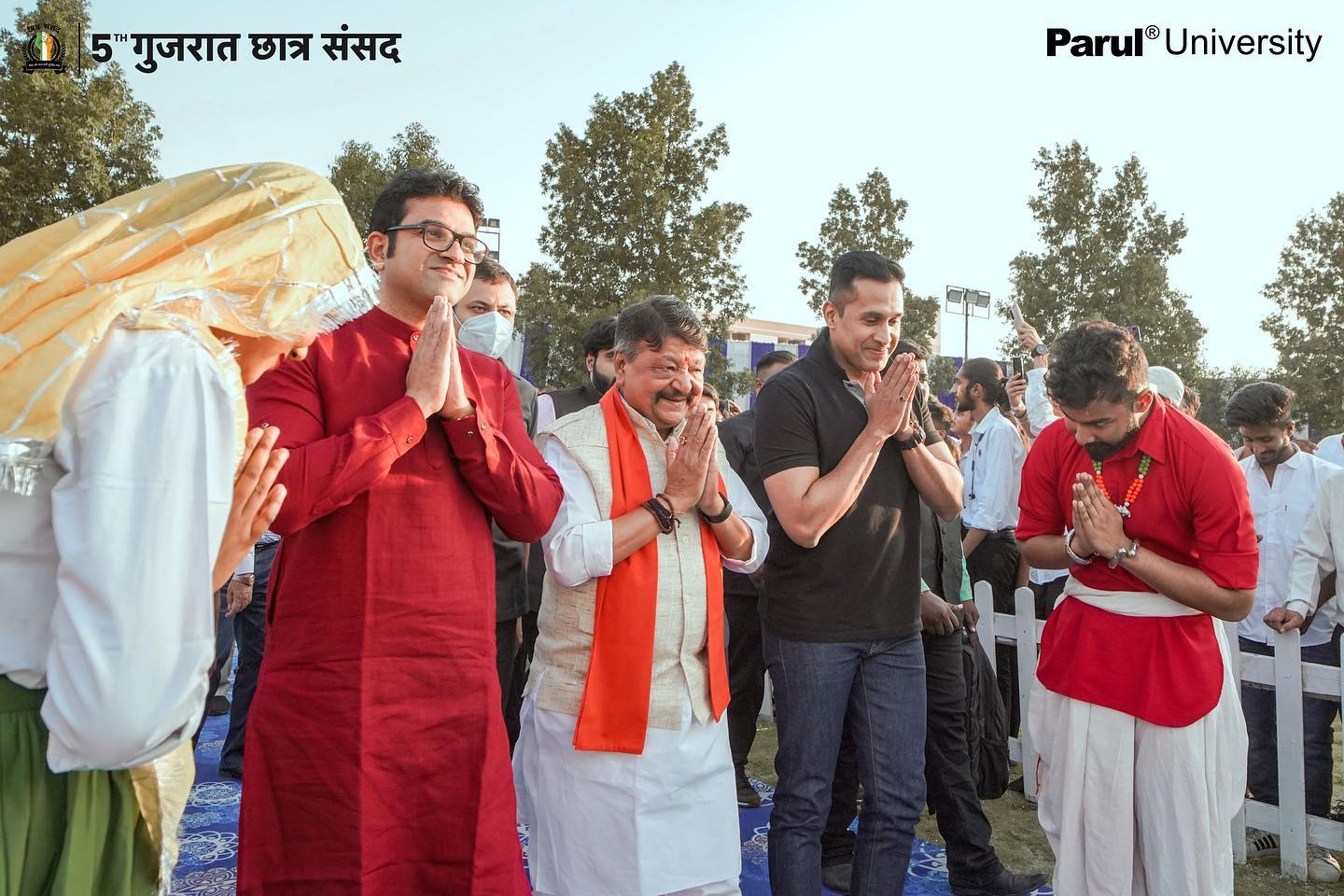 This grand gathering, brought to Gujarat the most iconic leaders and the great minds of India, to trace back the nation’s steps on its path of democracy. Chhatra Sansad, an initiative by Zero Hour Foundation, hosted the monumental 5th Gujarat Chhatra Sansad presented by PU on the 24th of April in Vadodara, Gujarat. The grandeur of this platform saw over 8,500 participants from across multiple sectors such as entrepreneurs, business leaders, law makers, young leaders, scientists, and other notable personalities, to celebrate India's 75 years of democracy. Spearheaded by Adv. Kunal Sharma, Founder-President of Chhatra Sansad, this PU held conclave hosted a diverse panel of speakers including the likes of, Shri Kailash Vijayvargiya, Dr. Kiran Bedi, Hon, Ranjan Gogoi, Smt Maa Anand Sheela, Shri Anand Narasimhan, amongst others. The platform also created the ideal atmosphere for leadership nurturing for the youth of PU, as well as the youth from across Gujarat and nationwide.

The event was successful in channeling insightful thoughts and shading light, on the path that the nation has taken towards shaping and developing a democratic India. The goal and  aim was to gather thousands of thoughtful, like minded people from across the country to participate, converse and find solutions to the problems and pitfalls of modern democracy. The event was divided into segments which commenced with an inauguration ceremony featuring Shri Kailash Vijayvargiya, Shri Anand Narasimhan and Shri Jitu Vaghani followed by their thought provoking and stimulating speeches, as well as an address by Adv. Kunal Sharma and Dr. Devanshu Patel, President, PU. “I can say with full confidence that after 2014, India is not just standing on its feet or even walking, India is running ahead at full speed”, said Shri Kailash Vijayvargiya. The conclave created history by being the first of its kind gathering in the city to bring together notable personalities and icons of various fields. “Tell yourself, ‘I am a set of possibilities, what is the best that I can become?’ Kashmir Files was a small film and citizens of India made it big”, said Shri Prakash Belawadi. 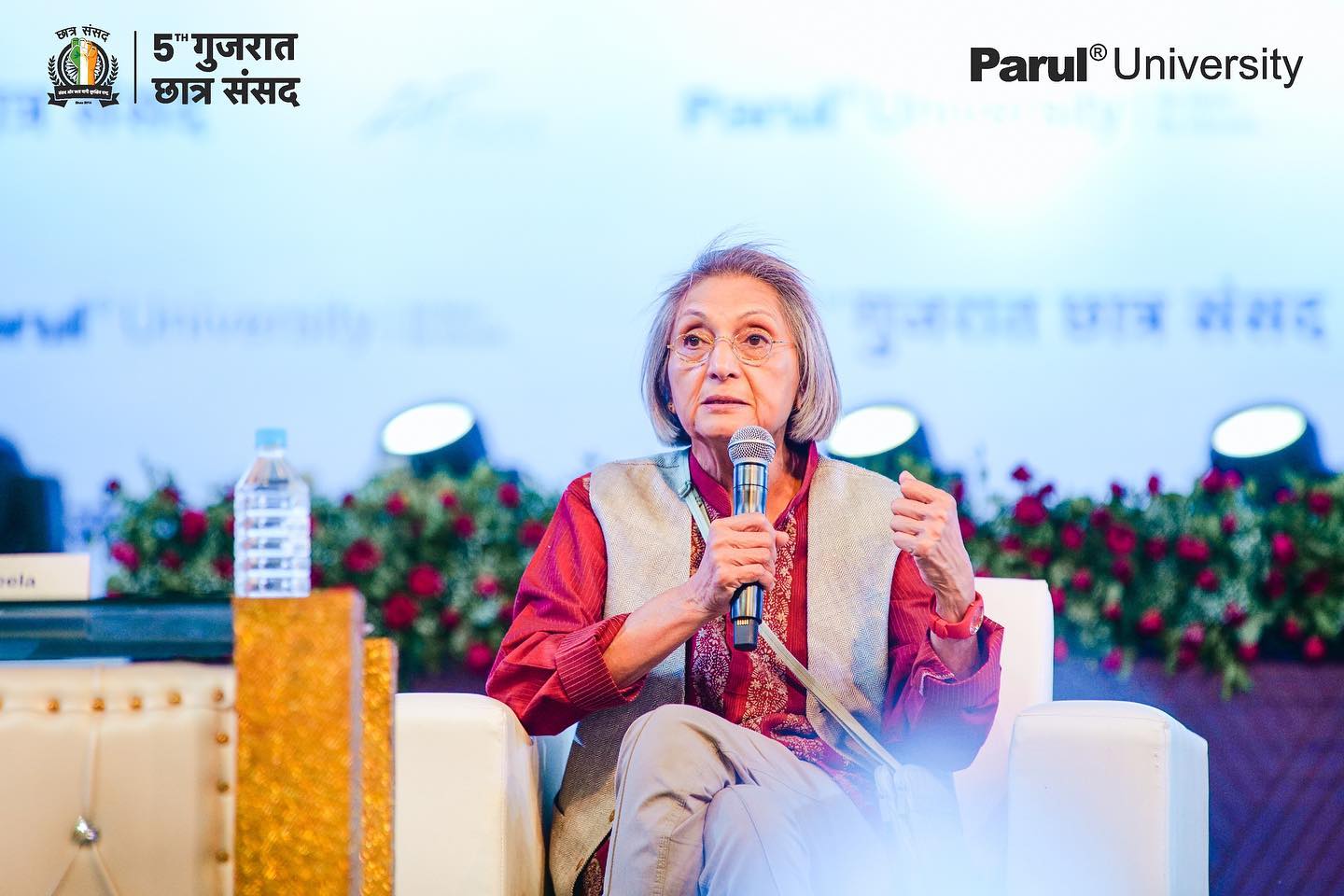 “Freedom of expression is a vital part of democracy so long it does not cross the Lakshman Rekha of public order and morality”, shared former Chief Justice of India Ranjan Gogoi as he addressed the gathering during the conclave. Speaking in line with the conclave’s objective of shaping future leaders, the Honorable former Chief Justice went on to highlight that “youth today, who wish to enter public life or politics must be aware that they cannot be successful unless they work hard and base their journey on facts. This is because it is very easy for misinformation to be spread because misinformation is very attractive. But in the end, truth always prevails”.

The first session of this gathering was headlined by an address by Smt Kiran Bedi, followed by a Panel discussion where Shri Uday Mahurkar, Shri Prakash Belawadi and Dr. Kiran Bedi discussed the various aspects concerning the historical developments of Indian democracy, having the main discussion centered around overcoming the colonial mindset, finding a place as a new democracy and emerging as a powerful nation. Shri Maulana Kalbe Rushaid Rizvi in his remarks shared that, “In the next 17 years, the India that we will see, is the India that we are building today”. 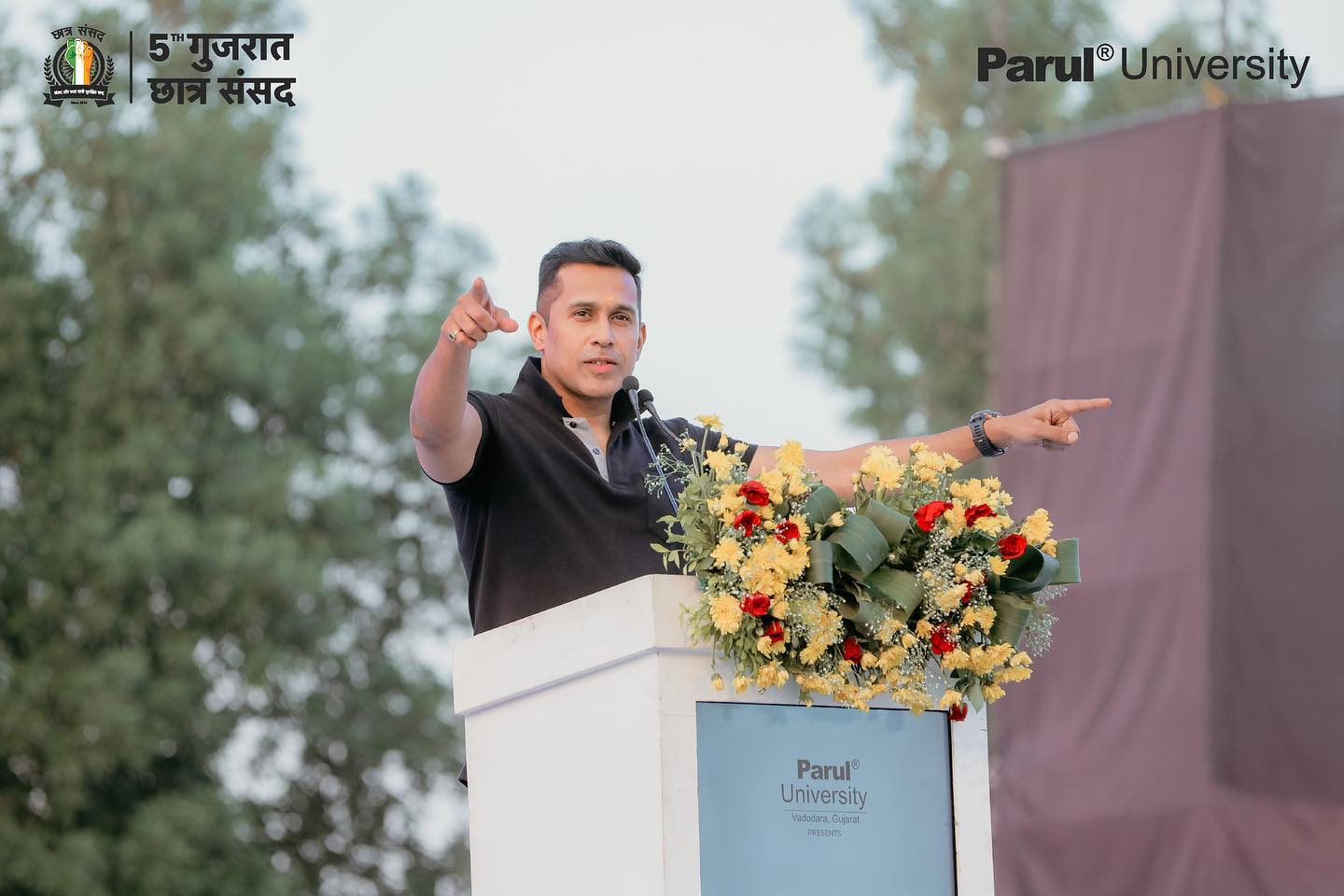 Dr. Kiran Bedi, prior to her address visited the University’s entrepreneurship exhibition where she got to witness some of the innovations developed by the students. “I want to make young men and women of India realize that they too can be in positions of power, that they too can dream of a better India and that they and only they are responsible for it and the best way to become a leader, is to learn from a Leader” commented Chhatra Sansad, President Kunal Sharma. Shri Anil Shetty went on to share that, “Why is it important to be in politics? Politics is not a spectacular sport, It's a participating game" and everyone should consider it”.

“We need to celebrate where we’ve arrived, as a country, since independence but also need to make promises to ourselves about where we can go”, shared Shri Shakun Batra. Another session featured insightful discussions from Smt Maa Anand Sheela and Shri Shakun Batra who gave powerful, inspiring ideas and perspectives focusing on India's present governance and system, how it can further develop into a more efficient system for all, with further discussions on the ideal average age of political representatives in India. "In our times, people were more laidback. They were busy only with marriage and children. Now, I feel so proud of young women who are finally recognising their inner strength and talent", said Ms Sheela. 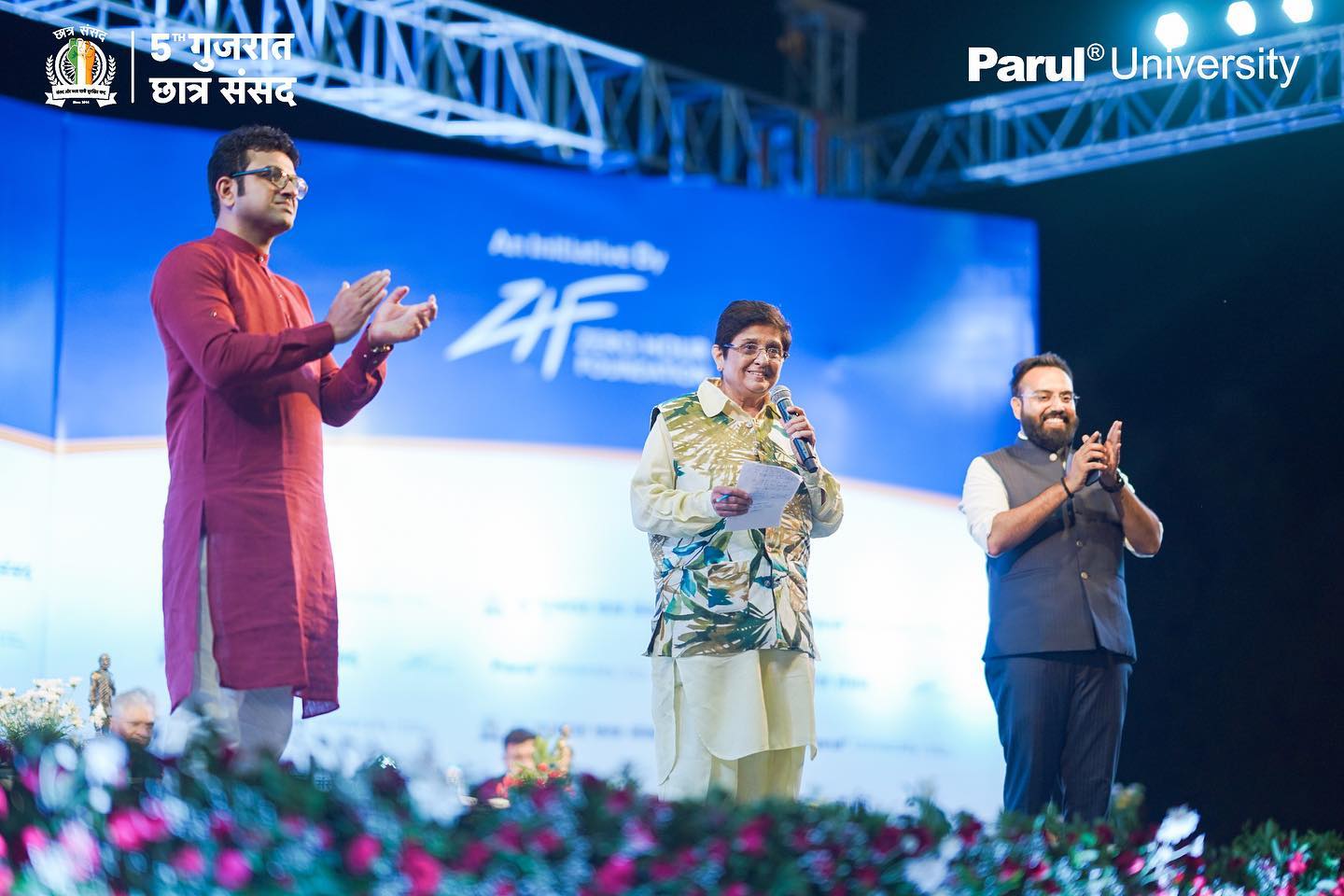 The final panel featured, young and high spirited leaders such as Smt Charu Pragya and Shri Anil Shetty with Shri Maulana Kalbe Rushaid Rizvi who led the discussion on the future of India and how the youth of India can be catalysts and lead India in technological and political fronts for the upcoming decade. “I want to tell all the youth that you might not be a part of politics but politics is definitely a part of you, political opinions are going to touch you, the government you choose is going to touch you” shared Smt Charu Pragya.

In addition to the talk sessions, the participants went on to engage with the speakers through “Kaun Banega Changemaker '', where they were polled on numerous key issues. The resolutions of this conclave will further be shared with the concerned state, national and international bodies. “Such a platform is of great value and significance as it allows the younger generation to not only get inspired by eminent leaders, but to also shape their aspirations in a way that furthers India’s growth and development”, said the University’s President Dr. Devanshu J Patel. 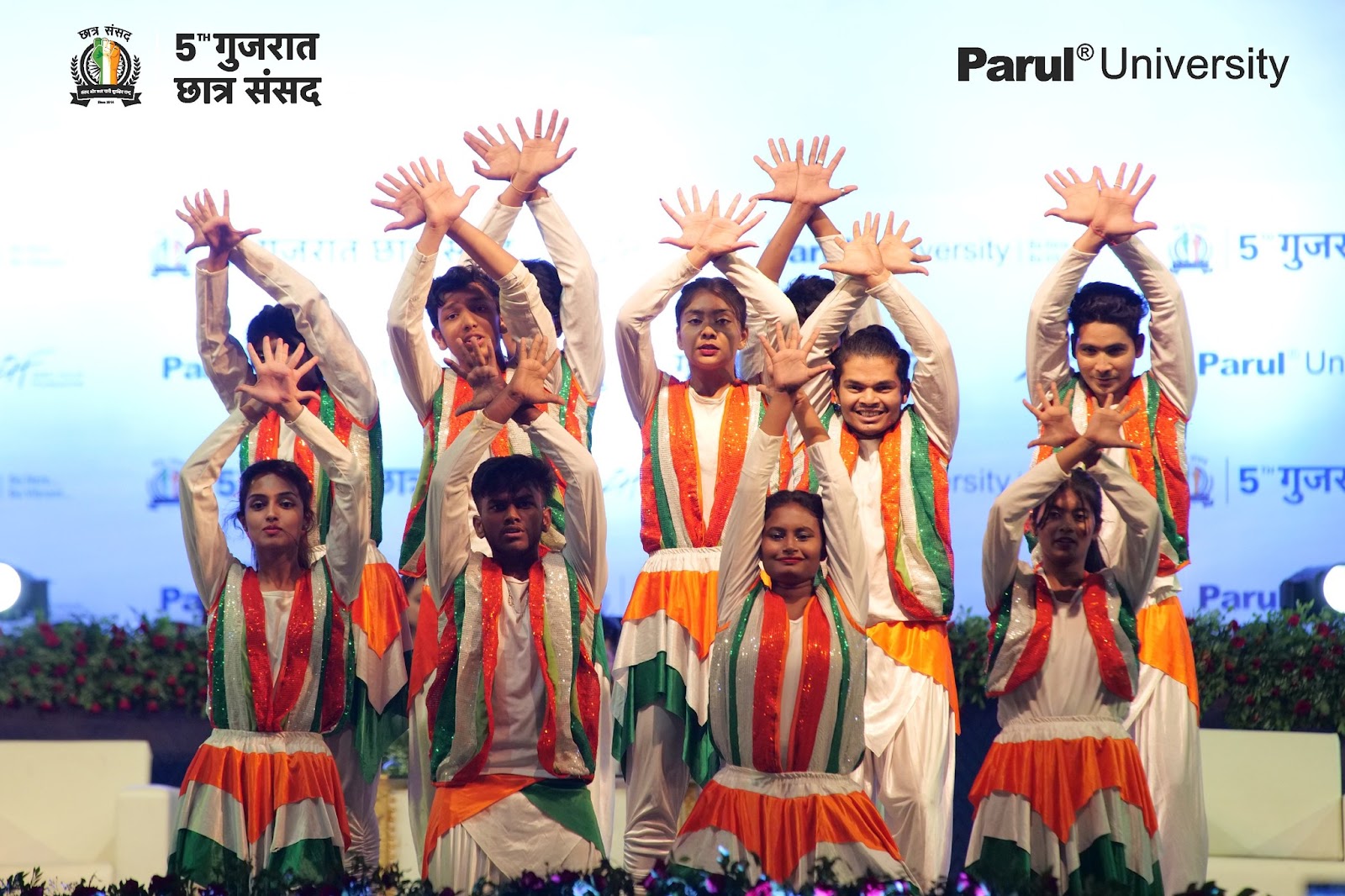